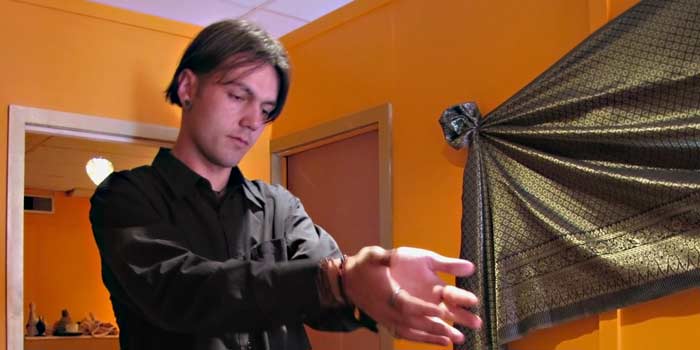 Deeksha (also spelled Diksha) is a concentrated dose of divine grace (blessing), which is, in this case, a divine energy transfer. This ball of energy is transferred to the head, which creates a shift in the brain, allowing you to realize your oneness with all creation. Over time, the result is an enlightenment where one feels an incredible oneness with the world, one another and the source itself.

The cause of the majority of suffering in the world is a sense of separation from the world itself. But the pure energy transferred through deeksha helps you realize that this idea is an illusion. Deeksha brings about healing on all levels of one's self: the physical, mental, emotional and spiritual.

To experience the divine energy transfer of deeksha, you do not need to change your lifestyle or make any vows.The state of mind attained with deeksha is not one that can be attained through personal effort; only someone specifically trained can activate the various centers in the brain with their energy..Since it is a biological event,it can be experienced by anybody.


What Happens During Deeksha?

Deeksha initiates a scientifically measurable neurobiological change in the brain that,when complete, is said to enable the senses to be free from the interference of the mind.When the senses are unclouded by the mind's interpretations,a natural clarity of perception occurs with accompanying spontaneous feelings of joy, inner calmness and connection to the oneness in everything. Deeksha is transferred by the Deeksha-giver who places his/her hands onto your head, usually for about a minute.Experiences during the deeksha vary, sometimes strong, sometimes subtle, sometimes delayed until even days later. The recipient may experience a tingling sensation in the head, or blissful energy flowing through the body, or sometimes nothing at all.Whatever the experience, the recipients are told they can trust that the process of enlightenment has begun, leading to a profound awakening into an all-encompassing awareness of the divine.


Who Can Receive Deeksha?

Most people over 18 can receive deeksha.The exceptions are pregnant women after 16 weeks and people suffering from serious psychological illness (in which case healing deekshas are given instead.)The transmission of deeksha is accomplished by a trained initiate who has received the transmission and training during a 2 day silent retreat.The deeksha-giver then works as an empty vessel for the energy to transfer to the receiver...

Does Deeksha Belong to any Religion or Belief?

Deeksha does not belong to any religion,nor any particular belief nor spiritual path.Deeksha is given each day to people all over the world,people of all races,all religions,all spiritual beliefs or no spiritual beliefs,and to people of all nationalities.It is not necessary to change one's religion,nor adopt a new guru or spiritual master to receive deeksha. Despite being presented in a new way, deeksha is not new at all but very ancient.Through deeksha one's neurobiology and neurophysical function can be changed,which leads to enlightenment,when all teachings and guidance naturally flow from within.The deeksha energy is transferred into the neocortex of the brain,which re-organises the entire frame work of consciousness.It has its own intelligence,and interfaces with the deepest longings and blueprint of each individual soul to create a new command centre that bypasses the mundane awareness of the mind....for more info www.onenessuniversity.org

Sri Bhagavan says of this process : The mind of man is like a wall,which divides man from God.The deeksha is an elecrical energy that makes a hole in this wall,which we call the mind.Once this happens,then God and man can come to relate to each other.